The Mornington Peninsula Shire have endorsed capital works to the value of $104,000 in the 2019/20 Proposed Budget after years of campaigning and following our recent submission.

​The Red Hill Station Reserve is on the corner of Point Leo and Shoreham Roads. 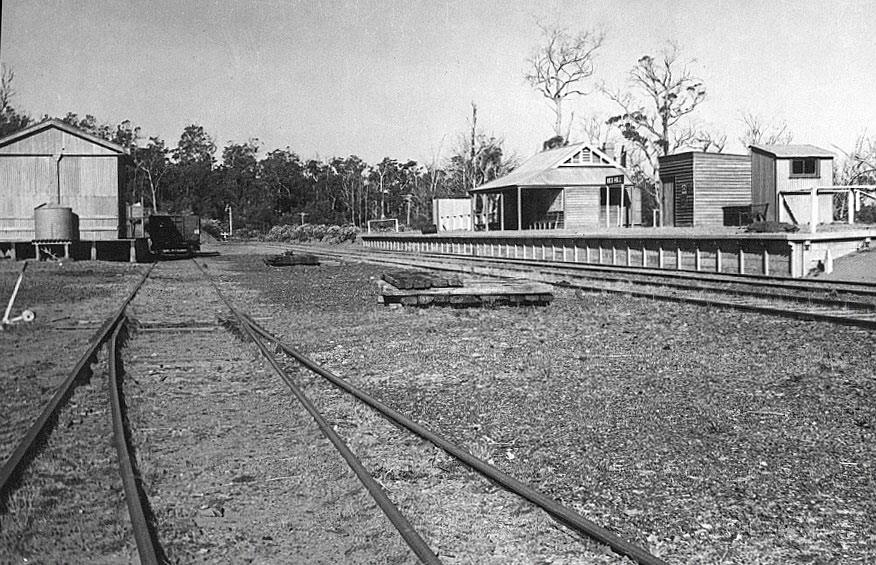 These documents reflect Council’s position on protecting and enhancing local character and values of the Peninsula’s settlements including Red Hill. You can view the documents here

Amendments to the Mornington Peninsula Planning Scheme will now be initiated to implement these important projects. You now have an opportunity to comment on the proposed changes as part of the amendment process.

Once approved by the Minister for Planning, the amendments will become part of the Mornington Peninsula Planning Scheme which sets out the planning policy and controls that planning permit applications are assessed against. The changes will ensure that future development respects township character.

RHCA made a submission in the first round of the public community consultation earlier in 2019 and the draft study and guidelines were on public exhibition from May to July 2019. Our top three areas of concern were: new development that is inconsistent with the predominant character of the area: the threat of over-development of the area: and, threats of development encroaching on the Green Wedge.

The project is about ensuring long-term planning and appropriate design in regard to all aspects of public and private development. It provides an assessment of the design/character attributes of each township and settlement and prepare associated design improvement plans, policies, design guidelines and related recommendations for improved planning controls among other things.
Red Hill Reflections
A colourful large-scale mural of the history and environment of Red Hill was recently been painted on the rear wall of Blue Moon Trading at the entrance to the Merricks-Red Hill shared trail. It was officially opened on Friday 15 June 2018.

The 20 x 2.4 metre mural was painted by local artist Michael Leeworthy with art students from Dromana Secondary College over a couple of weeks. It features nine separate panels as tributes to the area’s Aboriginal heritage, the Indigenous fauna and flora, the early settlers, the rail line, the food and farmgate, and walkers, bike and horse riders that use the trail.

The mural was commissioned by RHCA to cover the unsightly graffiti on the wall and help beautify the area as part of stage 2 of the Red Hill Station Reserve redevelopment. It was sponsored the Mornington Peninsula Shire’s Creative Community Grant.

“The mural looks wonderful and the different panels offer glimpses into Red Hill’s past and present.  It’s got Michael’s signature style and flair and we were particularly pleased to have the Dromana Secondary art students adding their touches to the project,” said David Maddocks, Vice President Red Hill Community Association.

RHCA organised a community consultation to garner ideas of what locals would like to see in the mural and Michael felt he “ticked all the boxes including the train. It’s been a very enjoyable job with the bike riders, walkers and horse riders coming up for a chat and telling me which is their favourite panel."

RHCA chose Michael to paint the mural because he is a well-known local artist with previous experience in painting murals with the community on the peninsula including the Red Hill Consolidated school’s 28 metre mural.

For Michael who has a lifetime of painting says he was thrilled to receive the commission, “I’ve lived in Red Hill for the past 33 years and I feel this is my town. I would have been a bit peeved if a stranger had got the job!”
​
We hope the mural generates enthusiasm and public momentum for the implementation of the remainder of stage 2 which we are currently seeking funding. This includes the reinstatement of the old station platform, removal of noxious weeds, indigenous planting and interpretive signage around the station platform and turntable.​ 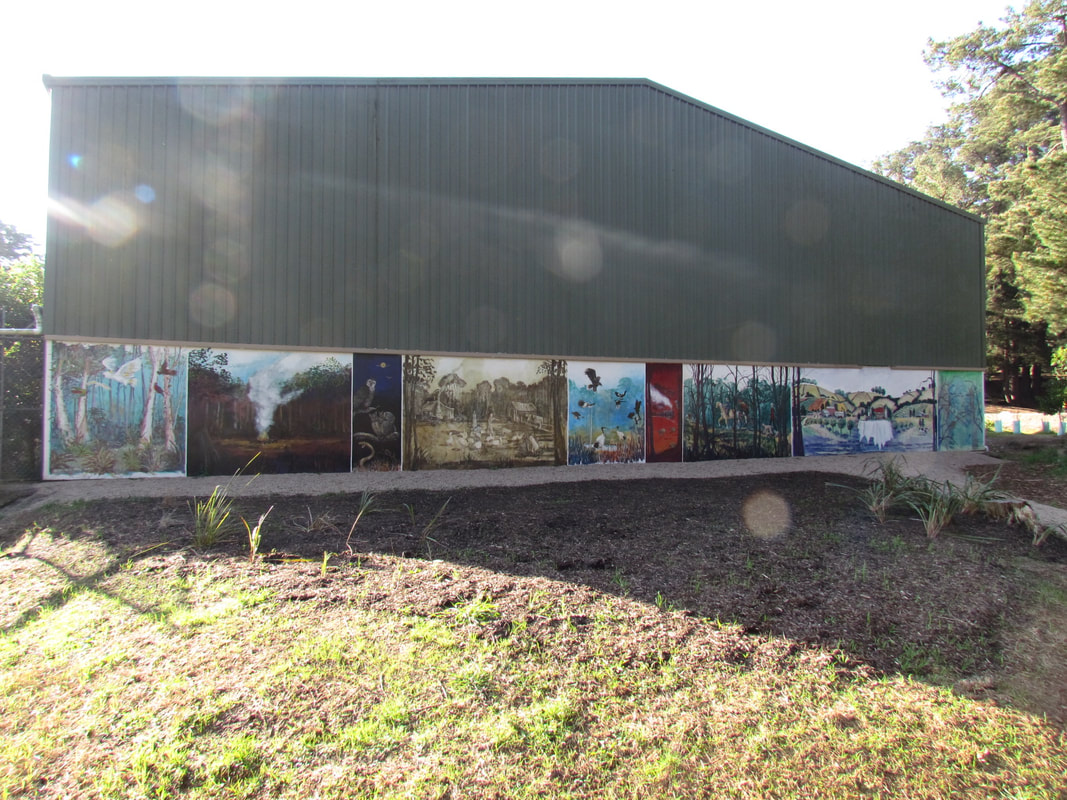 Other local stakeholder submissions are also being considered. OMG is collecting and analysing traffic and parking data currently.
Rural watch for Red Hill
Around 25 locals attended the RHCA led Community Safety meeting on Friday 26 May and it was decided to establish a Rural Watch sub-committee of RHCA. The changing environment of Red Hill and the influx of weekend visitors was seen as a mounting concern for locals.

​Hosted by the Red Hill CFA, the concerned group listened to Leading Senior Constable Julie Simpson from Victoria Police talk about the importance of calling 000 and identifying suspicious behaviour, and gave tips on how to make your home look 'lived in', and to let your neighbours know when you are out of town among other important safety messages.  Sue Mansie from the Somers Neighbourhood Watch Group related the Somers community positive experience.

​Interested in getting involved? Contact Tom Orr or Mark Stirling at RHCA by hitting this green button below  for more information.
​

Our fundraising sausage sizzle at Bunnings Rosebud on 20 May was a fabulous success. We raised more than $1800 after costs, and this will go towards completing the War Memorial donor plaque.
Red Hill Station Reserve Stage 2
RHCA is garnering support for funding from the Mornington Peninsula Shire to complete stage 2 of the Red Hill Station Reserve.

​The Red Hill Station Reserve is on the corner of Point Leo and Shoreham Roads. ​Specifically, we asked the Mornington Peninsula Shire to allocate $105,000 from the 2017-18 budget to advance this work.

​​​You can view a copy of our submission here. A formal presentation was made at the section 223 Council Meeting on 9 May 2017. We were not successful in this budget bid.

​​Online survey results - In April and May 2017, we conducted an online survey garnering feedback from our mailing list of supporters about Stage 2 works.  Here is a snapshot of the results: Thank you to those who took part.  The results and our petitions were forwarded to our local councillor in early May.

​
Community Park takes Tidy Town honour
RHCA is proud and delighted that its association with Manton & Stony Creeks Landcare Group and the Mornington Peninsula Shire has resulted in an award for the Red Hill Community Park which was opened last January.  The award falls under the "Protection of the Environment" category at the recent Tidy Towns, Sustainable Communities awards night in Horsham.

The Community Park is part of the Red Hill Station Reserve project and includes a high quality nature-based "playspace", BBQ and picnic area, bike park, walking paths and extensive planting of over 2,000 indigenous species of trees, shrubs and ground cover.

Removal of dominating pines and woody weeds and then landscaping the area was a key contributor to the award criteria and the award reflects state-wide recognition of the project.  The Bass Coast Shire's Conservation Reserve was Highly Commended in the same category.

David Maddocks, president of both the Landcare Group and RHCA, received the award and commented, "This is a great achievement for the Red Hill community and reflects the excellent collaboration between the community groups, DELWP which contributed with the "Communities for Nature" grant, and the Shire's contribution both financially and by project management".

This was the 34th year of the awards and there were 12 categories.  The major award "Tidy Town of the Year 2016" went to the beautiful city of Horsham and Josie Jones won the Dame Phyllis Frost Award for her campaign for protection of the marine environment of Victoria. 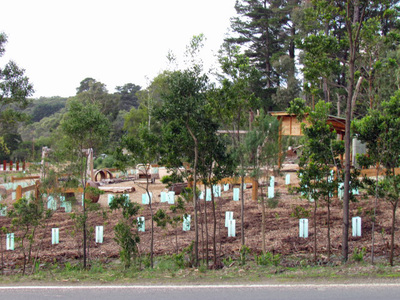 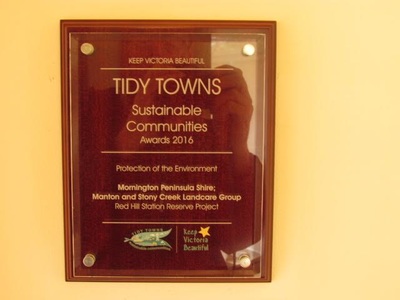 War Memorial Wins Heritage Award
RHCA is delighted to announce that it has won an award for Creation of a Heritage Place in the scheme run jointly by the National Trust, Mornington Peninsula Branch, and the Shire of the Mornington Peninsula.  This is a new category and we are honoured to have won the inaugural award.  The presentation was made by President Judy Walsh to RHCA's President, David Maddocks.

NBN is coming to Red Hill

Late last year, RHCA met with representatives of Ericcson Australia and NBN Co. to discuss the roll-out of high speed broadband in the hinterland. Work has already begun in other parts of the Peninsula and is scheduled to start in the second quarter of 2016 for Red Hill, Red Hill South, Shoreham, Balnarring, Flinders and Pt Leo, ultimately bringing the NBN to 4,800 homes and businesses.

Where premises are in close proximity to each other, the service will be delivered by "fixed line", ie fibre to the node.  In areas where buildings are more spread out, delivery will be via "fixed wireless", ie radio signals from up to three towers placed strategically over the hinterland.  For those houses that cannot be served by fixed wireless, a satellite connection will be available, provided by a dedicated satellite which was launched successfully on 1 October last year.

It is estimated that approximately 13 towers will be required to service the whole of the Mornington Peninsula, and these will be co-located on existing mobile telephone towers wherever possible.

RHCA is hopeful that mobile phone providers will take the opportunity to place their antennas on any of the new NBN towers, thereby helping to reduce the number of mobile phone blackspots on the Peninsula.  As well as providing an improved service, this would also improve communications at times of emergency.  For example in hot, dry summers when the risk of bushfire is elevated, it could literally mean the difference between life and death.

There will be a further information session for Red Hill residents in the next few months.  We'll keep you posted.

Community Park:  Green Army Comeback
In 2015, the Community Park was the last of the several projects that the Green Army volunteers worked on during their secondment to the Mornington Peninsula.  In five weeks on site, they did a great job in clearing up after the tree felling, removing smaller woody weeds and putting in paths through the park area.  We thank them very much for their enthusiasm and keen involvement in our project.

We've been fortunate in having the Green Army returning to the site several times in the months since then, during which they have been busy planting out various types of indigenous grasses and sedges around the perimeter of the park.  It's heartening to see the young plants shooting already, helped by the winter rains.

Recently, over 500 tubestock were planted, completing the Shire's landscaping plan.

RHCA is continuing to work with the Shire and CFA regarding developing a fire safety strategy for the people of Red Hill.  This is an ongoing project and because of its complexity due to the hinterland's terrain and lack of a place of last resort in the event of a fire, will take some time to complete.  Please read the discussion paper we prepared last year and if you have any comments, we'd like to hear from you.

Another factor in bushfire preparation is management of roadside reserves and overhanging trees.  We have conducted a survey of the main "escape" roads in our area and have presented our findings to the Shire.  At present, we await its response.

Closely linked to the risk of bushfire is the proliferation of mobile phone black spots in the hinterland, so we are also working on improving mobile phone coverage, which could be a life saver if fire were to threaten our area.
Contact Us